English Barn Dance Bands in the Scottish Highlands for hire 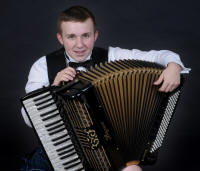 Covering English, Scottish, Irish, French & European Ceilidh & Barn Dance, the CP Band consists of some of the most well known and talented musicians in the Traditional Music scene. All members are Scottish champions in their own right winning a mixture of solo awards as well as band awards. Bringing traditional music and dance to the Scottish Highlands with this English Barn Dance Band / Ceilidh Band. Band Leader Craig is used to communicating with and performing for audiences at a professional level and has personally gained experience performing the accordion at major concert venues all over Scotland. ...show more

The English Barn Dance Band pages list bands that are available in the Scottish Highlands. People often get confused by what is different about a Ceilidh dance, Barn dance or Hoedown. Barn Dance or Country Dance is the English terminology for basically the same kind of event, but with some specifically English tunes and dances, though many tunes and dances are claimed by a number of countries. If you are unsure, identify what kind of dance band would be suitable for your wedding day or celebration in the Scottish Highlands, click on the link below:

About the Scottish Highlands

Scottish or Scottish-ness is an attribute given to anything to do with Scotland (Gaelic: Alba), a nation in northwest Europe and one of the four constituent countries[5] of the United Kingdom. It occupies the northern third of the island of Great Britain and shares a land border to the south with England. It is bounded by the North Sea to the east, the Atlantic Ocean to the north and west, and the North Channel and Irish Sea to the southwest. Apart from the mainland, Scotland consists of over 790 islands.[6]