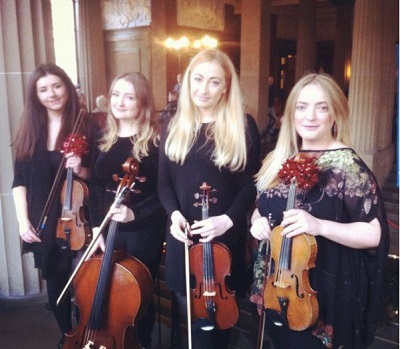 The EC String Quartet is an all female string ensemble, formed after meeting at Paul McCartney’s music college The Liverpool Institute for Performing Arts and playing as section leaders in the Liverpool Philharmonic Youth Orchestra. Since forming in 2015, the quartet have played at many events up and down the country, including featuring on Channel 4 as part of Hollyoaks twice, and providing music for events for Liverpool Football Club, The Royal Liverpool Philharmonic Orchestra and Hermes. The .Quartet have also provided backing strings for indie-rock band Circa Waves, and recorded strings for bands including The Christians and Zuzu. Members of the quartet have worked with artists including Nile Rodgers, Rudimental, ELO experience and performed at events including Garage Classical at Liverpool International Music Festival, providing backing strings for Britain's Got Talent's 'Richard and Adam' amongst many more. They have also played at multiple weddings and private events in venues including St George’s Hall, Manchester Art Gallery, The Anglican Cathedral, the Metropolitan Cathedral and The Royal Liver Building to name a few. They pride themselves on being a young, fresh, vibrant ensemble and their repertoire includes everything from Tchaikovsky to Gershwin to Queen. Members of the EC String Quartet also arrange their own music, in order to keep up to date with modern pop releases!