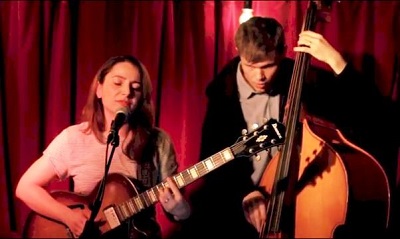 The HS Band are a duo formed by vocalist and guitarist Cris and Nick on double bass. They perform classics Motown, Jazz and Soul pieces for bars, restaurants, private parties and functions. Cris is a London-based jazz/soul singer with a unique sultry voice. Her love of the genre led her to complete a degree in Jazz at Middlesex University where she specialised in vocals and piano. In 2008 she formed a Jazz Function project with guitarist Oliver and has been entertaining audiences throughout London, Italy and the UK for over 8 years with an extensive repertoire of jazz standards. In early 2017 Cris and long time friend bassist Nick decided to form a Soul and R&B duo called HULOS, performing Motown classics and some upbeat Jazz standards they are now performing for private parties, pubs, restaurants and weddings. Cris delivers a stunning, classy and soulful performance that will elevate your audience and make a success of your event. Nick is a professional Double bass and Electric Bass player based in London. He has worked in a variety venues across the country including Ronnie Scotts, The Royal Albert Hall, The Royal Festival Hall, The Vortex, The Roundhouse and Glastonbury festival . Nick also played in an orchestra of 150 musicians for the world premier of John Cage/Merce Cunningham’s Ballet ‘Ocean’.

A Trio can also be offered, adding a drummer.