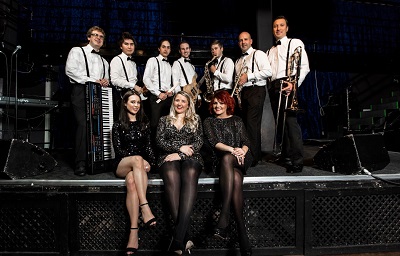 This band includes some of the most in demand and exciting talent in the music industry providing breath-taking renditions of the great pop, funk and soul hits from the 60s right through to the current top 40. The band captivates audiences with their exceptional talent and exhilarating shows.

Members of the group have performed at famous venues like the Shepherds Bush Empire, Wembley Arena and the O2, and also on the renowned sultry stages of London’s gig circuit including venues such as the Jazz Café, Ronnie Scott’s, and the 100 Club. But the band are always ready to pop on their bow ties or glitzy dresses to perform at 5 star venues many of which they are already familiar with, such as The Ritz, The Dorchester, and London Marriott Hotel.

The members have performed at a bewildering variety of functions, in prestigious locations globally. Their versatility is evident through the number of events they have headlined for cruise ships, birthdays, weddings, leavers’ balls, bar mitzvahs, casinos, and corporate events proving they can blend seamlessly into any occasion. This weight of experience is married with impressive educational backgrounds with conservatories such as the Royal Academy of Music, Tech Music School, and London College of Music. There really is no musical challenge too big or too obscure for them.

Many members of the band are classically trained, jazz enthusiasts who love nothing more than an impromptu jam. Each member of the band has their own passion and being experts in their field they have succeeded in playing with some of the greats like The Wailers, Sly & Robbie, Andrew Lloyd Webber, Martha Reeves and The Vandellas, and The Osmonds to name but a few. Several group members have been sought out by record labels for recording contracts, and have been able to support acts such as Girls Aloud, The Saturdays, The Jonas Brothers, and Eliza Doolittle. Other members have played for West End shows including Jesus Christ Superstar, Beauty and The Beast, and Joseph and the Technicolor Dreamcoat. The band is also availalble in a smaller line up.

With hundreds of shows under their belts, this band is a master of its craft and can ensure special occasions are nights to remember. The group’s charismatic stage presence coupled with being the most professional musicians in the industry can make dream events become realities. Whatever your vision is, be it a 10 piece band with full horn section, a romantic acoustic duo, or a smoky jazz trio, this band is the answer.