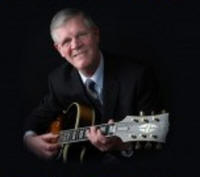 Geoff has been playing and teaching guitar professionally for over 30 years. Over these years, he has travelled as a working (session) musician across the UK and Europe.

Geoff started his professional guitar playing career in bands that worked in London night clubs and most of the city's leading hotels. He was also employed as a session guitarist working in numerous recording studios. He then spent a year in Sweden playing lead guitar with one of Scandinavia's top groups whose recording of 'New Orleans' went to number three in the Swedish Charts.

Geoff now plays at special events such as wedding receptions, Civil Ceremonies, anniversaries, birthdays and corporate events. Generally, he works across the Home Counties (Buckinghamshire, Oxfordshire, Middlesex) but has no trouble travelling further afield within the UK.


Although Geoff is a solo guitarist, he always has his superb backing group with him pre-recorded.