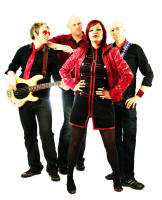 The RE Party & Function Band are a professional Male/Female fronted live Band from the Midlands. Their blend of modern chart, indie rock,80s’s and disco classics are perfect for all occasions.

They play a wide variety of cool and contemporary dance floor fillers as well as killer classics guaranteed to get the party started.

The RE Function Band have been full time professional musicians since 1999.