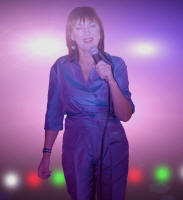 Linda singer/musician has accumulated many years of experiences and performed with some of the worlds top musicians.Her Jazz style was heavily influenced by her working with and guidance of the late Sir John Dankworth. She is equally at home performing as a solo entertainer on luxury cruise liners, or touring with stars like Des O' Conner, Jim Davidson, Ken Dodd and the late Sir Harry Secombe also as an invited singer to perform at a party for Prince Charles.

Linda mostly works with just her painist but she is also available with her accompanying band, consisting of Piano, Sax & Flute, Bass, and Drums.

Linda's repertoire includes jazz-cabaret/swing and Latin covers with a few of her own composition/songs on request.