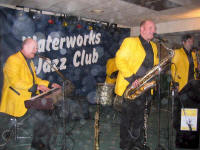 Formed originally in 2000 this band have already made a huge impact with their exuberant blend of jump jive and swing dance music. Hailed by ‘The Stage’ magazine as “one of Britain’s best ever party bands”, they have enjoyed great success at dance clubs and venues throughout this country and are building a loyal following amongst the jivers of Northern Europe.

The band’s music carries echoes of the great Louis Prima and Louis Jordan and they combine the energy of early rhythm and blues with an animated stage presence and infectious humour.