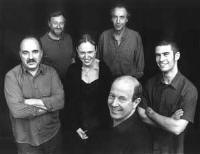 An all Irish Session Band. The Band is a tight knit band who believe in playing traditional Irish Music, with feeling and excitement, and that the music should be enjoyed not only by those playing it, but most importantly by those listening to it. They provide a uniquely “Irish” evening in every sense of the word. Instruments played are harp,bodhran, fiddle, bouzouki/guitar, uilleann pipes/low whistles, flute, vocals.

The band can provide Traditional Music suited to all occasions, from the club or concert stage, to larger venues such as national folk festivals. They also specialise in concert performances, corporate functions and other special occasions; adapting their repertoire to suit the different requirements of each venue.

This band" provide a uniquely “Irish” evening in every sense of the word.

As well as traditional Irish music, the band can also play a wide variety of European music - which can be described, under the generic term, "Celtic". Tunes and Dance rhythms from places as diverse as Spain, Brittany and Scotland form an integral part of the band's musical repertoire.