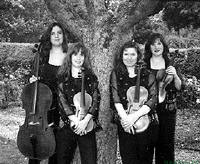 The members of the this string quartet have been working professionally since 1993 as soloists, chamber and orchestral musicians. Between them they studied at The Royal Academy of Music, The Royal Northern College of Music, Trinity College of Music, London and The Liszt Academy, Budapest. They have performed for Sir Yehudi Menuhin, Luciano Pavarotti, Prince Edward and Lady Thatcher amongst others.

The members of the string quartet have worked with many eminent musicians including Nigel Kennedy, Julian Lloyd Webber, Sir Yehudi Menuhin and Placido Domingo and have performed throughout Europe as well as in North America and Asia.

The string quartet have a very extensive repertoire ranging from classics such as The Four Seasons and Eine Kleine Nachtmusik, to the Romantic music of Elgar; from the rags of Scott Joplin to the jazz songs of Gershwin. They also have arrangements of popular songs from the 60s and 70s.