Jazz Guitarists - for your Event

To see available Jazz Guitarists
select your County or Location

The Jazz Guitarist pages list soloists and larger guitar ensembles who are available to perform in your area. They are particularly appropriate for wedding receptions, parties, restaurants and anniversaries. To find out more about them, read on: 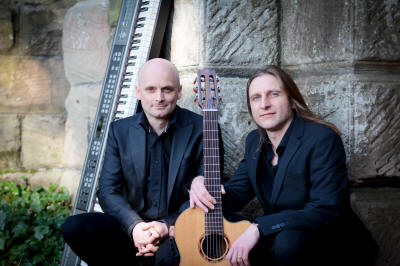 Jazz guitar is ideal for a wedding reception in a small venue, music in a restaurant or bar, a relaxed 'bonding' dinner and evening of 'bonding' at a corporate event. Having said that, because guitars are either acoustic with pickup or elecrtric guitars, volume can be indipendent of  the one instrument, the only restriction being the power of the PA. So if you like Jazz Guitar, go for it!

Use the drop down box at the top of the page to select the county where your venue is and see the musicians who are available to perform there.

The earliest use of a guitar in jazz may have been by trumpeter Bunk Johnson (1889-1949) attempted to reconstruct it during the I940s revival of early jazz. The instrumentation of Bolden's band established the format for most early jazz ensembles in its combination of three melody instruments (trumpet or cornet, clarinet and trombone) and a supporting 'rhythm section' (guitar, double bass and drums).

This developed into the big band, with for example the Henderson orchestra comprised three trumpets, one trombone (a second was added in 1927), three saxophones (doubling as clarinets) and a variable four-piece rhythm section (piano, banjo or guitar, double bass or tuba, and drums). Once again the guitar is used as part of the rhythm section rather than a solo instrument, which it later became. 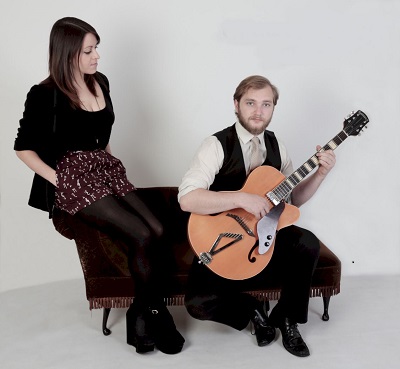 This changed when Coleman Hawkins appeared in Paris with the newly formed Quintette du Hot Club de France, the first European ensemble to reach the high standards of American jazz groups. With its suave violinist Stephane Grappelli (1908—97) and colourful gypsy guitarist Django Reinhardt, a new brand of small-ensemble jazz was created, that included the guitar as a major instrument in its own rich and looked forward to the later bop idiom, so that became Gypsy Jazz became the music of1930s Paris in the days of Josephine Baker, Picasso, and Hemingway.

Art Tatum's trio of piano, bass and guitar had been modelled on a format introduced around 1937 in Los Angeles by Nat 'King' Cole, also brought the guitar out of a backing instrument to the importance it has today. Then there is guitar in Blues music. Jazz and blues are often referred to as cousins. Some accounts say that jazz came out of the blues, or that jazz has its roots in the blues. Actually jazz and blues developed side by side.

By definition, blues is both a musical form and a music genre, while jazz is defined as a musical art form. The blues refers to both a certain type of chord progression and a genre built on this form. Jazz is much harder to define because its range is so broad, encompassing everything from late 19th century ragtime to modern fusion music.

As Jazz and blues have so much in common, there is an intimate mix performed by some of the jazz guitarists on the Midsummer Music Afgency website. Both jazz and blues originated in the deep south of the USA around the end of the 19th century. The blues came out of the African-American communities, from their work songs, spirituals, field chants and hollers. The blues is characterized by its chord progression, the use of flattened or bent notes or “blue notes”, and its sad and melancholy lyrics.

Jazz guitar is such a divers musical form that  you really need to listen to the music samples on our website to find the style that is right for you.

Here are some interesting resources on the history and performance of Jazz:

HISTORY OF JAZZ FROM THE VIEWPOINT OF FIDDLE PLAYER
Origins of Jazz
JAZZ AND FOLK MUSIC.
Formal notation of jazz
The origins of spirituals in jazz
Printed music versus tradition in jazz
Rhythmic Elements of Jazz
Emphasis in Jazz Rhythms
Emotions and Jazz Rhythms
Sections of a Jazz Band
Jazz Pollyrhythm
The Big Jazz Band - the Jazz Orchestra
The Standardised Jazz Orchestra
Commercial Jazz Band Orchestration
The Psychology of Jazz Band Syncopation
Tap Dancing & the Jazz Band
The Jazz Band & Indo Jazz Fusion
Blues and Transforming Jazz into an Art Form
The Jazz Band in the American Psych