Harps: Worcestershire - for your Event

Audrey is in great demand as a soloist for corporate entertaining and weddings. She is the first call harpist at Coombe Abbey, Coventry, The Lygon Arms, Broadway and other prestigious venues throughout the Midlands. The Harp will add a touch of class to your event in Worcestershire. Audrey has worked with all the major symphony orchestras including six years as Principal Harp with the B.B.C. and Ulster Orchestras. She is also the Principal Harp with the City of Birmingham Touring Opera and The Royal Shakespeare Company.

She has played for many VIP's, Celebr ... more

Amanda is one of the most exciting young harpists in Wales today. Her musicianship combined with a strong technique and a lively character puts her in the front line of contemporary musicians. A Harp to create a perfect atmosphere for your Worcestershire wedding or anniversary. Amanda has appeared on British, American and Japanese television and has captivated audiences with her harp recitals and her own unique style of jazz and cocktail music. Engagements have included playing for HRH Prince of Wales and Reverend Desmond Tutu. 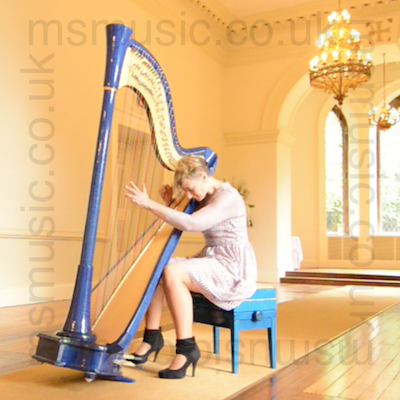 Former Royal Harpist and alternative live looping artist, Jemima is an award winning harpist with a difference. Worcestershire is within this Harp’s local performance area. Often described by her clients as being the highlight of their day and exceeding all expectations, Jemima uses an electro- acoustic harp alongside loop and pedal fx technology to create quirky, unique covers that will have your guests talking and playing "name that tune" all day! Her renditions of songs such as Game of Thrones, Sweet Child O' Mine and Gangsta’s Paradise are fast becom ... more

Ruth is a talented harpist with 15 years professional experience in all areas of performance. She has played harp throughout the UK at major concert halls and prestigious venues including The Royal Albert Hall, Truro and Exeter Cathedrals, St. James' Palace, Queen Elizabeth Hall, and Barbican Hall. An ideal Harp for a wedding or dinner in Worcestershire. Now based in the west country, she performs extensively around the South West frequenting the beautiful Roman Baths and Assembly Rooms as well as many of the luxury hotels in the area.

Meinir graduated from University College, Cardiff. Since 1972 she has held the post of Principal Harp with the Orchestra of the Welsh National Opera, touring extensively and taking part in almost all of their widely acclaimed recordings. The Harp will add a touch of class to your event in Worcestershire. Most recently, she appeared on the best-selling Charlotte Church CD, ‘Voice of an Angel’, which featured on four tracks for voice and solo harp. Meinir has played with many other famous names, including Bryn Terfel, Luciano Pavarotti, Dennis O' Neil, Kiri Te K ... more

One of Britain’s leading young harpists in demand internationally, Llywelyn has a wide variety of experience catering to many different types of special occasions from corporate functions to weddings, anniversary milestones, birthday parties and can add a poignant touch to a funeral. Having studied a whole range of different repertoire he can offer multiple genres such as Traditional Welsh music or other folk music. He can also offer a Classical repertoire alongside Jazz standards and even curre ... more

Maxine has a busy free-lance career with some of the UK's leading Symphony, Opera and Ballet Orchestras including the Halle, Opera North, National Symphony Orchestra, English National Ballet, City Ballet of London and Moscow City Ballet. Worcestershire is within this Harp’s local performance area. She also pursues a solo career performing Concertos and Recitals. She has entertained Royalty, and worked with a range of celebrities as diverse as Tenor Russell Watson and Rap Star Kanye West. She has also played aboard cruise ships, at major sports events and ... more 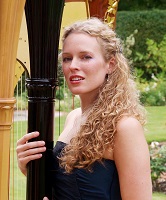 Award winning harpist Harriet is in high demand for weddings and functions due to her expertise and performing flair. With over 15 years' experience in the industry, she combines her musical talent with absolute professionalism and a ‘can do’ attitude. In the past few months alone, Harriet has played everywhere from a performance opening the new Indian Wing of the V&A in front of HRH Prince Charles, a special appearance for the charity Warchild's Winter Wassail, and recorded at Abbey Road Studi ... more

During the last few years she has played at various events ranging from a memorial ceremony at Westminster Abbey to lavish events at the Hilton Hotel in Cardiff. The Harp will add a touch of class to your event in Worcestershire.

Some of the other events include the opening night of the Liberty Stadium, functions for political parties, including high profile Conservative Party events, Welsh Assembly events, ... more

Xenia is an experienced harpist who plays a white maple grand concert harp with gilded soundboard. The liquid brilliance of harp music adds a magical dimension to any occasion and provides a relaxing, melodious atmosphere for you and your guests. A Harp to create a perfect atmosphere for your Worcestershire wedding or anniversary. Xenia can arrange music according to your tastes from Court Music and Baroque, through light classical to contemporary composers. She also sings and can compose for your special event.

The Harp pages lists musicians who are available to perform in Worcestershire. They are particularly appropriate for the wedding breakfasts, dinners and evening entertainment. To find out more about them, read on:

Worcestershire, home of Edward Elgar, and still a centre for music with the Chandos Symphony Orchestra and the English Symphony Orcestra. Like many English counties Worcestershire boasts an interesting diversity of countryside and provides opportunities for enjoyable walking in many places.

There are the glorious Malvern Hills, home of Midsummer Music, providing an impressive south western border to the county with their distinctive nine mile ridge profile. In the north west is the Wyre Forest, the largest area of continuous woodland in the county and, due to its age and diversity, an interesting location for walking. The Severn, one of England's great rivers, enters the county near Bewdley, in the north west, and flows southwards to leave near Tewkesbury in the south west.

The Severn Valley is steep and wooded in the north, widening out to a broad flood plain of pasture land in the south, offering some lovely riverside walks along the Severn Way.

The north west corner of the county, west of the River Severn, is a peaceful area of undulating farmland, intimate valleys and small villages ideal for relaxing walking. The River Teme, from Tenbury Wells to its junction with the Severn south of Worcester, also has a quiet rural valley ideal for leisurely walks. In the south east Bredon Hill provides bracing walks, with fine views across the Severn Valley to the Malvern Hills and delightful villages to explore. Even further east at Broadway the county offers a taste of the Cotswolds and a walk up the dramatic escarpment to Broadway Tower. Worcestershire's area has a very odd shape, but it is approximimately 44 miles wide and 24 miles deep.

It has four major rivers running through it, those being the Severn, Avon, Tame and Stour. Produce included grain and fruit. Worcester manufactured gloves, porcelain and cabinet ware, and in other towns were tanneries, glass and iron works. Wool-spinning, linen-weaving and the manufacture of needles and nails also took place throughout Worcestershire. Kidderminster was well known for its carpet manufacturing.

Musically, Worcestershire is famous for the composer, Elgar. Edward Elgar was born in the small village of Lower Broadheath outside Worcester. The Malvern Hills are now a focus for musical talent, being the residence for some years of the violinist Nigel Kennedy and the focal point for many of our String Quartets, Ceilidh Bands and other music groups.

Worcestershire is famous for its cricket. A Function Band or Cover Band is a great way to let off steam at an after match party. An alternative to a Party Band that has worked well is an Irish Ceilidh Band, ensuring everyone gets involved.