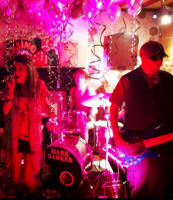 Formed only in April 2012, the band have already gained huge popularity on the Midlands music scene. Highlights have included a fantastic four-month residency slot at Nottingham's premier comedy club Jongleurs, and performing for over 10,000 people as the entertainment at Leicester City Council's bonfire and firework celebrations.

The BT Function Band deliver a high-energy, quality performance at every event - whether the capacity is 60 or 6,000. With a wealth of experience and credentials (all members are trained to the highest industry standard, and have individually worked with Atlantic Records, BBC Television & Radio, Sugababes, Atomic Kitten and many more) the band are committed to providing the best possible live entertainment, whatever the occasion.